If you follow the left road in the crossroad of Prinos and in a distance of 4 klm, you will reach the first Kazaviti, the so called Mikro Kazaviti (Small Prinos). 500 m after that lays Megalo Kazaviti (Big Prinos). They are definitely the most traditional little villages built in a hills’ slope, inside a dale. Unfortunately, today a lot of houses have been abandoned by the local people who left for finding jobs and better life in the lowlands of the island or ever further away.

Resisting in time, the old stone houses with the wooden balconies and the hand-paιnted ceilings, climb up in scales through dense greenery. In the past century, these villages were called Papaz-Mahala and Tsingoura respectively. The Kazavitia villages flourished during the years when the highland villages had many more inhabitants and were well developed due to the piracy overruling the seaside areas. In addition, in Megalo Kazaviti operated a very important School which contributed in the development of the village. Today, you can visit Kazaviti and admire the remains of the schools, the old mansions and the churches, but mo stly to relax and enjoy the sounds of nightingales and running water. The nature of the area is very generous and that is why Kazavitia is the fist place for tourists to visit when they reach Thassos. Here you can enjoy drinking coffee in the villages’ square or have dinner in Vasilis’ tavern just in the entry of the village, which boasts the best food on the island. The last years many taverns and restaurants are open the hole year.

Let’s see how its cultural union presents the village:

..the area was inhabited since the ancient years. A lot of castles and pottery testify the settlement of the inhabitants since 4th century BC.

It was an agricultural–rural establishment in an area which was famous for its
vineyards and fine wine. Rather recently a laboratory was discovered which fabricated a special type of amphora for the storage and transport of wine, estimated around the 4th century BC.

The area preserved the same agricultural-rural profile during the ulterior years as well as the main relation to the vineyards; the wine seems to testify the name “Kazaviti” which is Latin in origin and its etymology comes out of the words casa (house) and vitis  (vineyard). 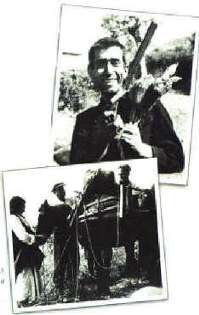 Today, the most preserved character of the villages is mostly of 19th century while the oldest signs f ound on houses are dated in 1806 and 1807. The houses preserved up to date are of the so called Macedonian Architecture type, built by skilled workmen of West Macedonia and Epirus.

The villages Mikro and Megalo Kazaviti are of the most significant traditional settlements of our country. However, due to their desertion by the inhabitants since 1960 and after, they experience problems in their overall development and preservation. Their recent inhabitants are in great deal foreigners or native people outside Thassos, while the domestic people of the island who preserved their houses are very few.

The marvelous situation of the villages, the unique flora and fauna which surrounds the area and its great historic and national value, necessitate the activation of all relative national vehicles towards the solution of the serious problems and the preservation of these settlements in their traditional form.

From the cultural union’s diary…

(Κατηγορία: Τα χωριά μας)
The village of Maries is one of the oldest ones in Thassos. It is build on a gorge, on a high altitude. From early times...
...Περισσότερα

(Κατηγορία: Ιστορία)
During the years of Macedonia’s obscurity, Thassos becomes the devoted concomitant of Rome. In spite of this loyalty, th...
...Περισσότερα

(Κατηγορία: Τα χωριά μας)
If you follow the left road in the crossroad of Prinos and in a distance of 4 klm, you will reach the first Kazaviti, th...
...Περισσότερα